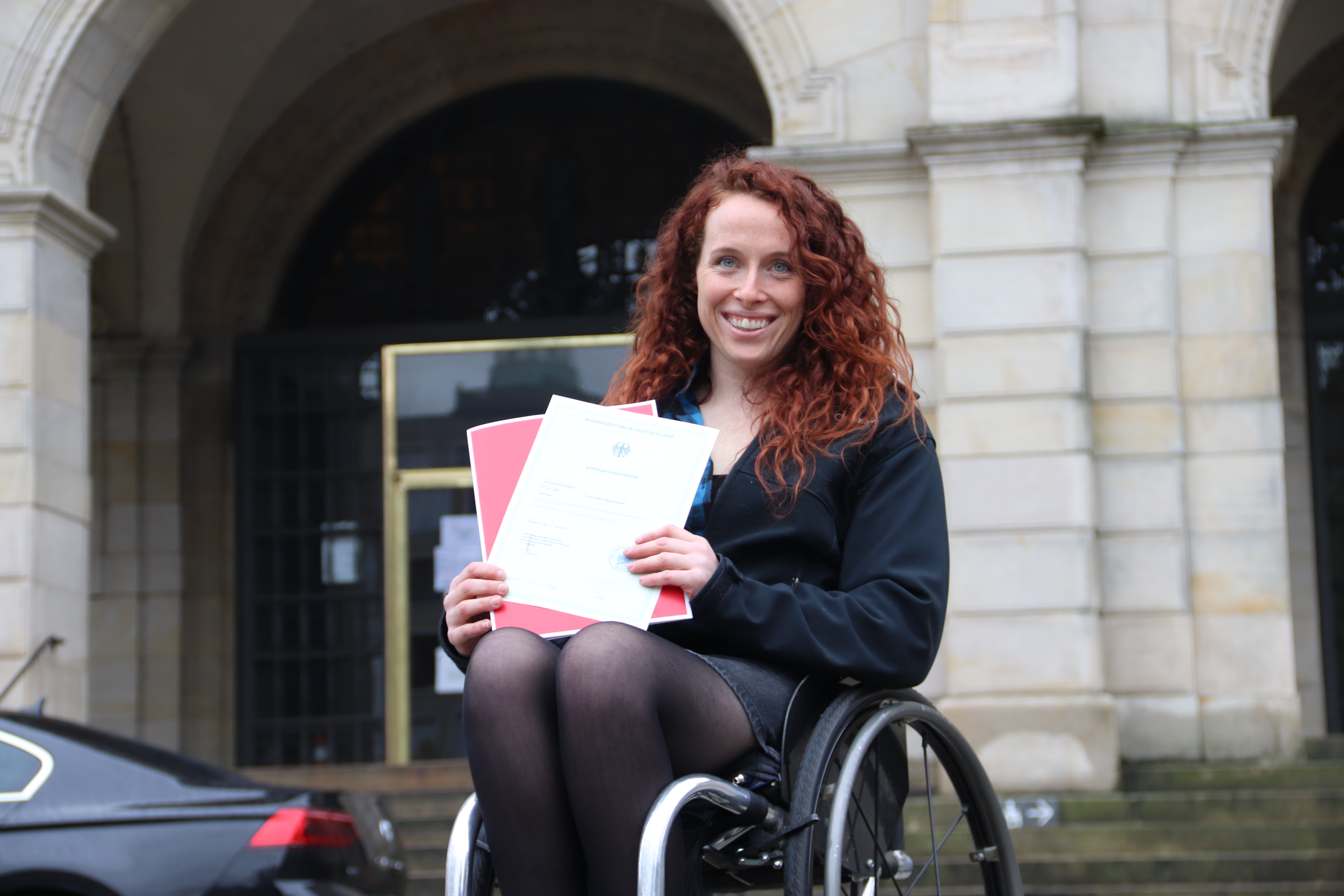 You live in Germany for more than four years now and for three years in Hannover. Tell me one thing you like and one thing you don’t like about Germany.
"It’s a really hard question. I think one thing I really like about Germany is how they are more concerned about the environment, so it’s greener for instance, the recycling system is a lot more “strategic“, so you have the yellow, blue and black bags and I really like that Germany has every kind of public transportation. As a country you can tell that they try hard to care for the environment. One thing I don’t like as much about Germany is all the paperwork that you need to do. There is paperwork for everything."

What’s your favourite activity on a sunny Saturday in Hannover?
"I live in Ricklingen and I have a dog, so I really like going to the 'Kiesteiche', but also there are a couple of fields for dogs in the area of Hannover and I really like taking my dog out and letting him run free."

How do you balance sports and family?
"I try to definitely make time for my family, and because America is in a different time zone, I really work on setting days that I’ll call them and really making a time, almost like an appointment to call my parents. So we’ll sit down on a Monday or something like that, and I’ll ask when is my dad working and then my mom gives me a schedule and then we decide okay maybe on Wednesday at 3 o’clock my time is best to talk to both of them together. So it’s just planning time to talk to them and with wheelchair basketball it’s kind of nice because we have the Christmas break and usually some time over the summer and then I can head back to the US and other than that, well when I’m here it’s usually just basketball focused."

How do you think the European style of basketball differs from the North American style you’ve played for many years?
"One of the biggest differences is that we play by different rules. So when you play in Europe you play by the IWBF Rules, so that means that the key/zone is actually bigger than in America, the three-point line is farther away as well. Also, the wheelchair basketball is much more professional in Europe than in America. In the US there isn’t a chance to play professionally, here in Europe the clubs are professional and there’s a bigger support system through sponsors and fans. Also playing over here in Europe is much more aggressive, so I think refs allow harder contact than they do in the US and I think that makes it a little bit more fun."

Has anyone specifically influenced you to play the way you do?
"I think I’m still trying to figure out my style of play a little bit. I think that for a really long time I always thought I needed to play one certain role and do this one specific thing. Recently, Martin Kluck’s coaching has kind of influenced me to try to expand and he’s kind of giving me the 'okay' to be creative and try different things. So I think him, as well as the team, encouraging me to try more things has definitely changed my idea of how I should play a lot."

Why did you decide to get German citizenship?
"It’s one of those things that when you live somewhere that becomes to feel like your home, and then when you leave that place, it feels like you’re leaving home. That’s when I kind of realized that I wanted to stay in Germany and at that point it kind of just made sense. While I’m here as an American, it puts a little bit more restriction on certain things because of different Visa types and regulations, so now that I have German citizenship I really feel free and like a lot of opportunities are now open. Germany, and Hannover, feels home to me and I feel “true” here and am beyond happy to now be a citizen."

Now to your German citizenship, do you think you will stay in Germany for a long time or do you get homesick sometimes or want to move back?
"It’s kind of like having two families or two homes. When I’m here I miss my family back in the US, but then also when I go back to the US and I’m with my family, I then also begin to miss being here. You miss both of them equally in different ways at different times, but I feel lucky to have both."

Is there any part of you that feels odd about potentially representing another national team?
"Not really. It would be an honor to represent Germany, as my home country now, and I am excited to now have this opportunity. I am really looking forward to what the future holds."

So you would sing the national anthem as well?
"Yeah, of course! But it might not sound the prettiest." (laughs)

Last but not least, where do you see yourself in 10 years?
"I think I will probably be retired from playing basketball at that point. My goal is at that point to be more into my career as a sports nutritionist and working at an Olympic center or with Paralympic and Olympics athletes and teams. I currently am finishing the International Olympic Committee Sports Nutrition Diploma program, and have focused a lot on Paralympic sports nutrition specifically. It’s definitely an area that is underdeveloped and could help the already rapid growth of the Paralympic movement. So in ten years, even if I’m not on the court as an athlete, I hope that I will be helping the next generation of athletes be able to perform to their maximum potential."